NATO to double down on offer to Ukraine Bloomberg 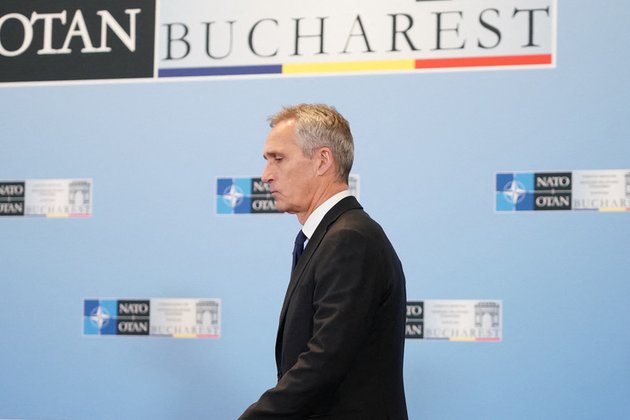 The media outlet claims the military alliance will issue an ambivalent statement, saying now is not the time for Kiev to join

The foreign ministers of NATO member states are set to reiterate the military alliance's readiness to welcome Ukraine into the bloc in principle, Bloomberg has reported. However, they are also expected to make it clear that Kiev cannot join at present.

A two-day meeting of NATO foreign ministers got underway on Tuesday in Bucharest, Romania. Bloomberg, citing anonymous sources, said the military alliance is expected to state that "its door remains open" to Ukraine, but that "now is not the time" for the country's accession.

At least some NATO member states are seriously concerned that, by accepting Ukraine into the alliance, the bloc could be dragged into a direct military confrontation with Russia due to its collective defense commitments, the report claimed.

With a lack of consensus on the issue, alliance countries have reportedly agreed to prioritize weapons deliveries to Kiev for the time being to ensure that Ukraine prevails on the battlefield.

Announcing Moscow's military campaign against its neighbor in late February, Russian President Vladimir Putin referred to the prospect of NATO membership for Ukraine, describing it as a major threat to Russia's security.

Bloomberg noted that the foreign ministers were convening in the same city where Ukraine and Georgia were promised that they would eventually be accepted into the alliance back in 2008.

The initiative was spearheaded by then-US President George W. Bush and his French colleague Nicolas Sarkozy at the time, but then-German chancellor Angela Merkel was far less enthusiastic about the idea, arguing that it would be seen as escalatory by the Kremlin. President Putin, in turn, made it clear that Russia would have to respond.

In September, Ukrainian President Vladimir Zelensky urged the military alliance to act on the promise made 14 years ago. His adviser Mikhail Podolyak argued that Ukraine's accession would be in NATO's own interest as the country "already has the biggest army in Europe," as well as unique "experience of conducting a conventional war against Russia."

DUBLIN, Ireland: The Irish Navy has reported that it canceled 12 of 26 patrols scheduled for January, primarily due to ...

PARIS, France: Following an 18 month controversy that exposed the workings of the global jet market, Airbus and Qatar Airways ...

PRAGUE, Czech Republic: Ahead of her visit to Taipei, Marketa Pekarova Adamova, Speaker of the Czech Lower House, reiterated to ...

OSLO, Norway: Ending a three-year run of profits as stock and bond prices were hit by rising inflation and Russia's ...

Nearly a year in, the war in Ukraine has cost tens of thousands of lives and brought the world to ...

While friends and foes rush to Syria's aid, U.S. refuses to help

WASHINGTON, DC - The global community has extended aid to Turkey and Syria following the devastating earthquakes that hit the ...

WASHINGTON D.C.: US lawmakers have called on the Department of Energy to release documents detailing attempts by Russian hackers to ...

Republicans in Congress to impeach border official due to migrants

WASHINGTON D.C.: In a sign of future political battles over record numbers of illegal crossings under Democratic President Joe Biden, ...

MOSCOW, Russia: Russian state-run TASS news agency has reported that a US woman was detained and fined by a Russian ...

ISLAMABAD, Pakistan - Former President General (retd) Pervez Musharraf died in a Dubai hospital on Sunday at the age of ...